“As much as talent counts, effort counts twice”- Angela Duckworth

Looking at a player’s development in football, it can clearly be said that the area is one that is bugged with confusion and concern. With football being a team sport, the players face constant psychological pressure to increase their value and contribution towards the success of the team and its coach. More often than not, players look at ‘talent’ as the main contributing element to their success in football. This fact is partially true, as although it is A factor, it is not the most important one.

It has been seen that the passion and perseverance of a player to achieve their long-term goals helps their professional development immensely. It can, thus, be stated that the concepts of grit and growth are interlinked and are vital to a player’s development in the professional level of football. The following article addresses two different topics: It explores the meaning and concept of grit, and then looks at the concept of having a ‘growth mind-set’ in football player development.

‘Is success guaranteed by a presence of natural talent or does a person’s effort in learning the skill affect the degree of achievement?’. This is a question that plagues anyone who is either considering or is already involved in a highly competitive field. It is often conceived that people who are high achievers have obtained their position because of their natural affinity towards certain skills. This prejudice is what causes the society’s obsession with the concept of “geniuses” in the field, thus disregarding the time and effort it takes to develop the skills and succeed. Duckworth (2016) instead defines the word talent as the improvement of skills by putting effort and investing time. She also states that success is not achieved by just developing and possessing various skills but comes from putting effort to use those skills for excelling in their field.

In other words, Duckworth’s (2016) theory states that both talent and effort are important variables affecting a person’s success. However, talent only takes a person so far, and it is the effort that a person puts into fine-tuning and using specific skills that determines the degree of success (FITZGERALD & LAURIAN-FITZGERALD, 2016). Duckworth (2016) also states that there are four main psychological elements that people who are ‘gritty’ have in common: Interest, practice, purpose, and hope. 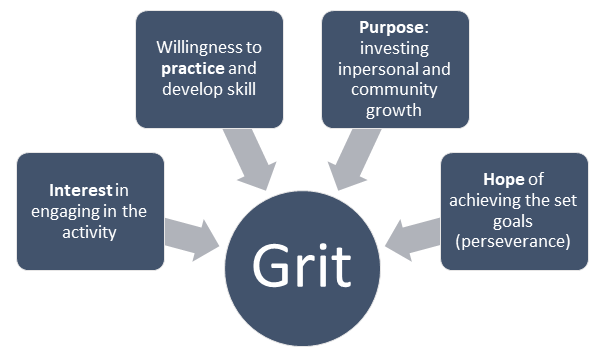 These elements are all required for achieving success and accomplishing the goals that you have set for yourself.

Individuals having a growth mindset work with the belief that effort (perseverance, hard work, taking in constructive criticism, etc.) helps achieve success in their chosen fields. This is a straight contrast from people who have a fixed mindset, i.e, people who believe that success is determined by the existence of talent. These people also tend to believe that there is a limit to a person’s talent, skills, and abilities, and that these cannot be developed further (Dweck, 2016) (FITZGERALD & LAURIAN-FITZGERALD, 2016).

In this video, Coach Ben emphasizes on the plus points of having a growth mindset, and indirectly relates to the concepts of grit, perseverance, and hard work. He also acknowledges that although talent is required to a certain degree, it is hard work and effort that decides the level of success an individual achieves. This compliments the research of both Duckworth (2016) and Dweck (2016) and their studies on the concept of grit and perseverance. 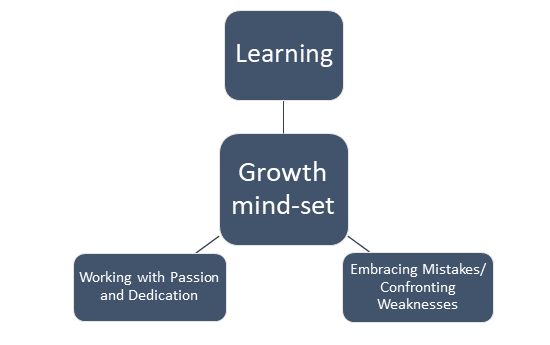 What does it mean for football players? It means that although the level of talent that players possess vary from individual to individual, the effort that they put in can help bridge the gaps between these differences. It is therefore hypothetically possible for all members of a football team to achieve the same level of proficiency, although other factors (such as injuries) may weigh in on this.

How Do We Develop Grit?

“ Grit is the stubborn refusal to quit”- Jonah Lehrer

Until now, we have explored the concepts of grit and growth mind-sets. The combined logic of grit and growth mind-sets gives us an individual who has a strong interest towards developing a certain skillset, which keeps them motivated to work hard, practice, and learn from mistakes made. But how exactly do we develop grit? There are many approaches to developing a gritty attitude in players, a few of which are suggested as follows:

You do not develop skills overnight. It takes loads and loads of repeat practice and hard work to master a skill. This technique is used by Navy SEALS in their training, where showing up to practice everyday and working on improving in weak areas is what enables them to develop copious amounts of grit. It is not only important to practice every day, but to also review the progress made and address all the strengths and weaknesses that were identified during the session (Barker, n.d.).

- Have a purpose and concrete goals:

Practicing regularly alone does not make an athlete gritty. There needs to be a ‘purpose’ or a concrete set of goals that gives meaning to the practice that the athlete engages in. Duckworth (2016) states that having no purpose to support an interest does not allow for long-term commitment. There needs to be a sense of meaningfulness behind whatever work you do for it to sustain for a lifetime. Athletes can therefore have a set of goals (combination of long-term and short-term goals) that they can work towards achieving through their practice. This would give their practice sessions meaning and purpose, making it more interesting and challenging, thus effectively capturing their interest for a longer period.

Athletes also need to acknowledge the existence of obstacles in their sport career. Failure in sport is inevitable, but how athletes treat failure is what separates the ones with a gritty attitude from the ones who do not. Failure should be treated as an opportunity to learn something, as it is instances of failure that highlight the possible areas of weaknesses that need to be improved on. Failing in something does not mean that the limits of the athlete has been reached but is rather an ‘obstacle’ that the player needs to overcome. When facing an obstacle or failing in a certain activity, the athlete must have the hope and hold the belief that this is an opportunity to learn something, a challenge to overcome, and not the end of the line. After all, one does not learn to ride a bicycle without falling at least once.

All the above elements cannot be implemented without giving it time and having patience. Developing in a sport as technical as football takes time and immense practice, and often times results cannot be seen immediately. Players need to hold onto the hope of getting better and have patience and trust in their practice sessions to truly start seeing a difference. Rome wasn’t built in one day, and neither was a football legend. Have patience while training, and results will surely be positive (McClurg, 2019).

- Passion for the sport:

All the above elements would amount to nothing and would not yield positive results and develop grit if the player is not passionate about football. Studies have indicated a very close correlation between the passion and grit of the player, as it is noted that one cannot have a gritty and determined attitude towards a particular field if they do not love the particular field (Sigmundsson, Clemente, & Loftesnes, 2020). It is passion which motivates a player to keep striving for success the hardest.

How does Treiner help?

Treiner offers multiple 1-on-1 coaching sessions. This type of coaching has been proven more beneficial than group training in the following manners (Micheal, 2018): 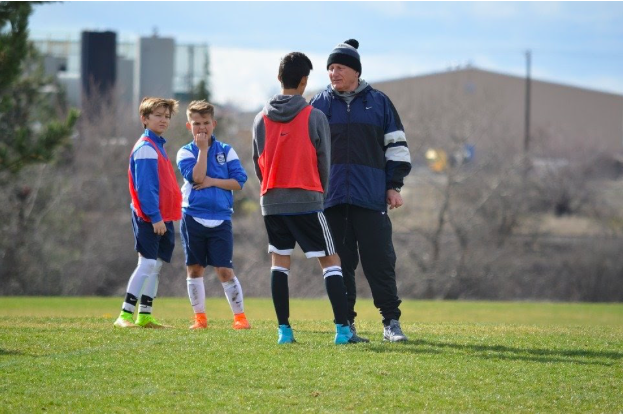 To sum it up, although talent provides a player with an advantage in being able to advance in the game quicker than others, it is only temporary. Other players can soon catch up with these players through hard work and effort put towards developing their skills. Therefore, talent is only a temporary advantage, and players must not get discouraged if they lack a little in talent when compared to others. Its contribution to the success of the player is not as magnanimous as it is portrayed and is not a very strong indicator of a player’s value. It is in fact the degree of effort and hard work, coupled with perseverance to master certain skills that speak to the value of a player, and is also the factor that largely determines the degree of success. Treiner’s private coaches can help develop grit by maintaining the athlete’s interest in the sport and also boosting their confidence (by way of delivering results and visible improvements to player’s game), which in turn motivates the athlete to keep practicing and pursuing their individual goals.

To book now, register or log on to https://treiner.co/login.

For support and further information:

McClurg, I. (2019, mAY 13). The importance of GRIT as a predictor of success in football (soccer) and in life. Retrieved from Amplified Soccer Athlete: https://www.amplifiedsoccerathlete.com/coachguide/the-importance-of-grit-as-a-predictor-of-success-in-football-soccer-and-in-life