Growth of Indigenous Football in Australia

Do you live and breathe football and coaching? Why the John Moriarty Football coach and mentor role is for you if you want to make a positive change to unlock Indigenous children's potential.

Aboriginal and Torres Strait Islander communities have a vital part to play in the development of all sports in Australia, and we all know the successes that have occurred in other codes including AFL and Rugby, but there has been a lack of intriguing pathways for both Indigenous players and coaches. Throughout history, football has had a great impact on the childhoods of many Indigenous communities, and John Moriarty Football (JMF) has announced that they will be setting up a program to help more than 3,600 Indigenous people with their football aspirations ^1.

John and Ros Moriarty established John Moriarty Football in 2012 at the request of senior Aboriginal law women in Borroloola who wanted to see their grandchildren educated^2. Since the inception of JMF, over 1,800 children have been coached and educated each week, resulting in 25 players being selected for higher honours in state and national representative teams across Australia^3. In April 2021, JMF announced the introduction of Indigenous Football Australia (IFA) to help unlock the potential of thousands of Indigenous children and will create more equitable access to the game for grassroots and elite players^4. John Moriarty Football already meets 11 of the 16 closing the gap targets which further enhances the already diminishing barrier of Indigenous participation and pathway access in Australian football, and the introduction of Indigenous Football Australia will aid JMF in continuing their goal of making football more accessible for Indigenous participants.

JMF Head coach and mentor Bryce Deaton highlights the importance of JMF in the Indigenous communities, “I’m loving working with JMF because we get to share our love for football with the kids around us as well as educate them on how to live a healthy lifestyle at the same time as having a lot of fun”. The world's game has a unique and rich history with Indigenous Australians from social games to exciting pathways for coaches and players alike, but it has not always been that way. The earliest published evidence of Indigenous involvement in football was Walter Ernest ‘Bondi’ Neal. Neal played in NSW’s Hunter Valley region between 1903- 1924 as a well-respected player^5. After disappearing after a game against a touring Western Australian team in 1909. Not much information was produced about Indigenous participation in professional football after this event until the emergence of John Moriarty and his history-making selection in the men’s national team in 1960^6. Since his retirement, he has become an influential figure of Indigenous sport and heritage.

As a result of John Moriarty’s involvement in the game, names such as Karen Menzies, Jade North, Lydia Williams, Kyah Simon and Shadeene Evans have been able to continue and create more pathways for Indigenous football players to improve and compete in elite football in Australia and across the world. 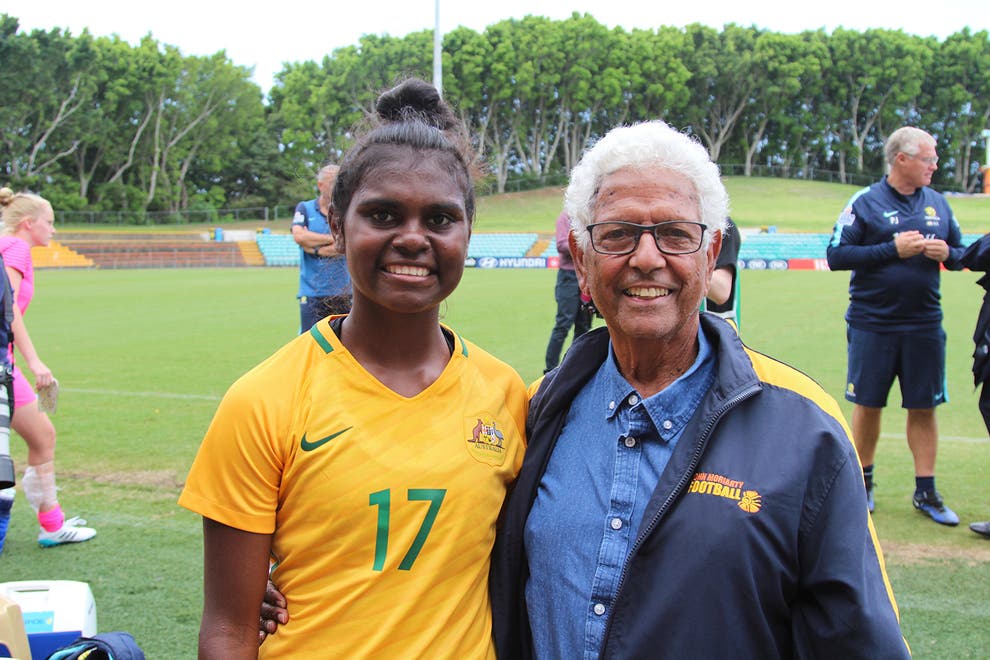 At the end of 2020, Football Federation Australia (FFA) had announced that they would be committing to growing Indigenous football by looking at pathways to increase Indigenous participation in football at both community and elite levels^7. This is a great step for football and Indigenous communities as it provides players and coaches a platform to excel and create new opportunities to compete in national and international set-ups.

In addition to this, during National Reconciliation Week 2021 (May 27 - June 3), FFA continued its growth of Indigenous participation by establishing a Reconciliation Action Plan (RAC) which will help facilitate expanding pathways for Indigenous football participants to improve and explore more opportunities within Australian football^8. This will greatly benefit and enhance the role that Indigenous communities have on Australian and international football, which has not been highlighted previously.

JMF is looking for many Indigenous and non-Indigenous coaches to help implement, and expand the IFA program in multiple regional and rural locations across Australia. Coaching in rural areas can be a great learning experience as living in remote areas can challenge you to get outside your comfort zone while also experiencing a different type of thinking to help educate and train players whose background and heritage is completely different to what many have lived.

Furthermore, coaching in these areas can help highlight skill development in players that previously may not have been coached or taught, and provide Indigenous children in schools and clubs, great role models, to look up to in life in football but most importantly outside of the game. This can be a very rewarding position as understanding how communities in regional areas live and facilitate football can benefit your understanding of different styles and to be able to add them to a coaching arsenal.

Football has been a mainstay in Indigenous communities for generations but has never had support from the media or governing bodies. With the introduction of Indigenous Football Australia and their developing support from state and national governing bodies, JMF can support football participation from Indigenous communities through state and national pathways, which will continuously help create opportunities for players and coaches to be able to succeed at the highest level.

The position JMF is offering is a coach and mentor position located in Borroloola, Northern Territory. This position will include duties such as liaising with schools and community organisations to develop a coaching delivery strategy, identifying training needs and development of all JMF coaching staff, and ensuring program development takes place with input from parents, elders and all community stakeholders.

This is a great opportunity that will employ full-time from 4-6 weeks and up to 6 months in regional areas to provide coaches with vital skills that would not be able to be attained practised unless they went to a developing country or Africa. Included in the job is training with an opportunity to upskill in specific areas, plus travel and accommodation for the correct applicant. In addition to this, it will provide an understanding of the barriers that have faced Indigenous communities not only in football but in many aspects outside of the game. If you are interested in this amazing opportunity, get in contact with John Moriarty Football using the link or emails below.